Two out of three military systems for non-EU and non-NATO countries. Egypt leads the list of licenses, with 872 million euros. Weapons for over 446 million also to the authoritarian regime of Turkmenistan, while the final deliveries invoiced amount to 2,9 billion.
29 maggio 2020
Fonte: Rete Italiana per il Disarmo - Rete della Pace - 29 maggio 2020

Egypt leads the list of licenses, with 872 million euros. Weapons for over 446 million also to the authoritarian regime of Turkmenistan, while the final deliveries invoiced amount to 2,9 billion.
In addition, despite the suspension of sales of aerial bombs and missiles to Saudi Arabia and the United Arab Emirates since July 2019 - due to involvement in the conflict in Yemen - last year new licenses were issued to these countries for almost 200 million euros and final deliveries certified by Customs reached 190 million euros. Approximately 95 million euros were delivered to the other members of the Saudi-led coalition while almost 25 million euros in value for hundreds of bombs were shipped from RWM Italy to Saudi Arabia. 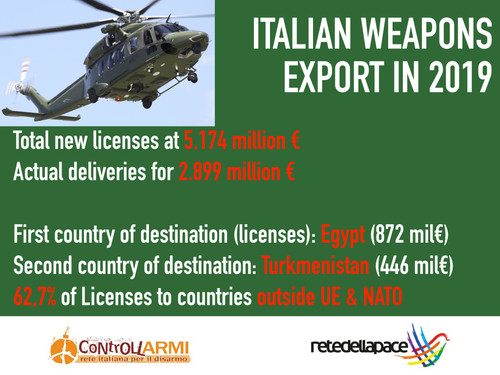 "We consider very troublesome and offensive that the sale of such a large arsenal of military systems to Egypt has been authorized, both in view of the heavy human rights violations by Al Sisi's government and its reluctance to shed light on the terrible killing of Giulio Regeni. We urge the Government to report the time of issue of these authorizations to establish the authorship and in any case to suspend all ongoing negotiations on military supplies until the Egyptian authorities have shed full light on Regeni's death” is the comment of the Italian Disarmament Network (Rete Disarmo) and the Peace Network (Rete Pace) on the aggregated data of Italian military exports for 2019. A few days ago the annual Government Report on arms exports has been transmitted to Parliament (with a serious delay compared to the legal deadlines only partially due to the Covid-19 emergency, as last year's publication time was also very similar). This official document is required by Law 185/90, which regulates the foreign sale of Italian military systems and summarizes the activity of the military industrial sector for last year.

During 2019 there were authorizations to armaments export for a total of 5,174 million euros, substantially in line with 2018 (slight decrease of -1.38%) thus stabilizing on a constant level of exports after the peaks of authorizations started in 2015 (8,2 billion in that year and then 14,9 billion in 2016 and 10,3 in 2017). However, this is 80% more than the values of 2014, so it can be said that the record exports in the three-year period 2015-2017 have dragged the orders for the Italian military industry to an average level higher than that of the beginning of the century, with as many as 84 recipient countries (since 2015 there are now more than 80 total destinations). An effect that will be felt more and more in the coming years on actual shipments and total turnover. In this regard, the Customs Agency records annual advances in final deliveries for a total of 2,899 million euros (2,388 million for single licences and 511 million for Global Project Licences).

Figures of authorizations for new licenses for a given year are the relevant political data, and the numbers immediately highlight some highly problematic decisions. The country receiving the largest quota of licences is in fact Egypt with 871,7 million (in particular to supply 32 helicopters produced by Leonardo spa) followed by Turkmenistan with 446,1 million (in 2018 it was not the recipient of any licence). In third place is the United Kingdom with 419,1 million in total and in fourth place we find the USA with 306,1 million. Among the top 10 destinations for Italian arms export authorizations in 2019 we find 4 NATO countries (2 of which, Germany and France, are also in the EU) together with 2 North African countries (Algeria in addition to the already mentioned Egypt), 2 Asian countries (South Korea together with the already mentioned Turkmenistan) and finally Australia and Brazil. Altogether, 62.7% of export authorizations are destined for countries outside the EU and NATO. 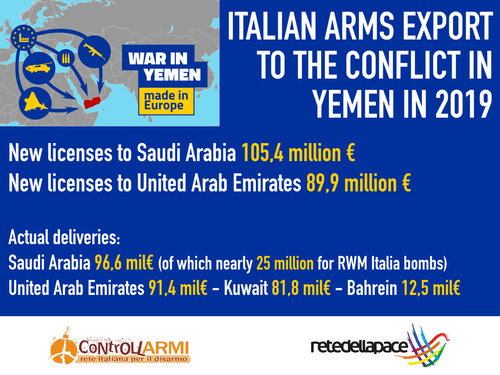 "Italy is still the negative protagonist of the flow of weapons to the countries involved in the bloody conflict in Yemen, with a very high toll of civilian victims, destruction of vital infrastructure and a devastating humanitarian impact also due to numerous and proven violations of human rights with possible war crimes. An unacceptable situation for which we urge immediate clarification and intervention from the Government and Parliament" also note the Italian Disarmament Network and the Peace Network.

It is not easy to immediately provide an in-depth evaluation and analysis of the more than 1,800 pages of data published by the Government, but already some initial evaluations of a certain seriousness are possible with regard to the countries involved in the dramatic situation in Yemen. "We can only consider very negatively the data that we read in the pages of the Government Report - comments Francesco Vignarca, coordinator of the Italian Disarmament Network - because we are talking about very high volumes of authorizations and transfers, despite the suspension of all licenses for air bombs and missiles to Saudi Arabia and United Arab Emirates since July 2019". A decision taken by the Government following a motion voted in the Chamber of Deputies, which, however, does not seem to have slowed down the armed affairs towards the members of the Saudi Coalition at all. "If we focus on new authorizations (i.e. on what can be produced and then exported from 2019 onwards) we find Saudi Arabia in eleventh place with 105,4 million euro and the United Arab Emirates in twelfth place with 89,9 million euro" comments Giorgio Beretta of OPAL Brescia "If in the second case it is a halving compared to the record of 2018, for Saudi Arabia there is instead a significant rise after two years of low volumes of licenses. Altogether, therefore, there are almost 200 million new authorizations which, at least from July 2019, should not be able to cover the two categories of arms already mentioned”.

"However, given the large volumes at stake, in a certain sense unexpected, we now ask the Government to clarify when these licences were issued and for what type of weapon systems. And we ask the same also with regard to the real supplies made in 2019", concludes Francesco Vignarca. In fact, it should be noted that the data concerning actual deliveries made last year and deriving from authorizations issued in previous years are cause for alarm because of their consistency: in 2019 more than 96 million euros in armaments and military ammunition were shipped to Saudi Arabia and more than 91 million euros to the United Arab Emirates. The latter were also final destination of 25 million euros for "re-exports" and 34 million euros for "temporary export". Two other member countries of the Saudi-led coalition active in Yemen received armaments for about 95 million euros (Kuwait for about 82 million euros and Bahrain for 12,5 million euros). A sure protagonist of these consignments of arms was RWM Italia, already placed by our mobilizations under the attention of public opinion and of the judiciary. In fact, in 2019 (we hope before the suspension decided by the Government) the company certainly sent hundreds of bombs of the MK series to Saudi Arabia (part of the mega-contract of over 400 million euros authorized in 2016) for a countervalue of almost 25 million euros. It is also probable the shipment of many other bombs included in some of the other licenses issued in recent years. Overall, the two Italian subsidiaries of the German giant Rheinmetall exported over 210 million euros of armaments during 2019.

As regards other companies, at the top of the list of authorizations received are Leonardo Spa with 58%, followed by Elettronica spa (5.5%), Calzoni srl (4.3%), Orizzonte Sistemi Navali (4.2%) and Iveco Defence Vehicles (4.1%). Total imports recorded amounted to €214 million, 68% originating in the USA and 14% from Israel (it should be noted that these figures do not include imports from the EU and the European economic area no longer subject to formal Governmental controls).